Why I Hate Gym

Why I Hate the Gym is the 6th episode of the first season of Ultimate Spider-Man. It aired on April 29, 2012.

Taskmaster goes undercover as a gym teacher to find Spider-Man; Spider-Man and White Tiger put aside their differences.

Spider-Man chases Batroc with his spider-cycle around the city, he uses his web on it and is pulled off from the cycle. He then tried to catch Batroc, but the former evaded the spider's every move. While this is happening Taskmaster watches Spider-Man through a monitor along with Doctor Octopus, trying to learn the moves of him. White Tiger consoled Spider-Man about informing S.H.I.E.L.D., Spider-Man tells her to take a rest and got kicked by Batroc. White Tiger then took care of Batroc by using her new equipped electric nails and entrapping him into Spider-Man's web. Taskmaster furiously breaks the monitor and shows his copied move from him and agreed to catch Spider-Man.

At school Peter arrived late for the meeting in the cafeteria complaining at Ava for catching Batroc. Harry then asks Peter to spread the rumor that he is Spider-Man, much to Peter's disagreement and explanation. He is then bumped by Flash, Coulson warns them and explains that Molskin is injured by Taskmaster's help, introduces a new teacher Coach Yaeger who is Taskmaster in disguise. Peter attends in PE, while Flash throws a dodgeball at Peter, who does not dodge in order to hide his identity, which he could have easily dodged it with his arachnid powers. Ava tells Peter that he does not need to go overboard to hide his secret. Coach Yaeger is going to test the students for the potentials of them being Spider-Man. As he studies the movement and body structure of Flash, Harry, Danny, Luke, Ava who Yaeger ignores and Peter who fails on purpose. Yaeger chooses Danny, Flash and Harry for the finals and invites them to come the next day. Ava complains that she was not chosen and decides to investigate tomorrow and invites Peter to come. Peter rejected the offer and points that Yaeger is suspicious.

In the night, Coulson entered his principal room, Taskmaster sneaks up on him and knocks him out. He activates the watch of Coulson which reveals a blueprint of the school and the security system which S.H.I.E.L.D. modified.

The next day, Peter was sound asleep until Ava calls her to investigate why the school has activated the security systems. They enter the school building and rescue Stan from a robot arm, unfortunately he falls into a pitfall. Spider-Man and White Tiger find Coulson, who is hanging above toxic waste. He explains who Taskmaster is and they should not fight him alone. As Spider-Man hears Harry's scream they run through the hallways while dodging the traps of the security system. While Harry, Flash and Danny are chased by Taskmaster. A trap activates with a shutter shutting off, but Flash and Harry were just in time to get behind it. Danny fights off against Taskmaster, he is shocked to find out he is copying his moves, then Taskmaster then knocks him out.

Taskmaster briefs his failed mission to Octavius, who furiously destroys his facility. Taskmaster decides to take revenge on the bug.

At school, Flash and Harry are getting interviewed by Daily Bugle Communications, while Peter and Ava were discussing their mission. Ava thanks Peter for this oppurtunity to do this solo. 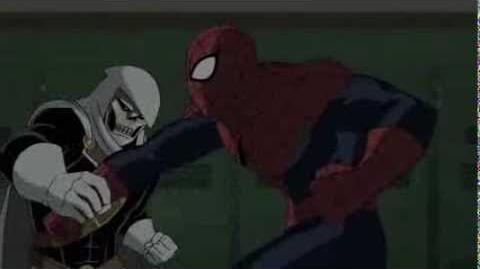