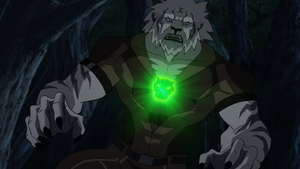 The White Tiger Amulet is a powerful and mystical green amulet in the shape of a tiger's head that gives the user supernatural powers. However, if the user does not have the mental capacity or willpower to control the amulet, then the amulet will control the wearer, taking over their body permanently.

It has been past down from generation to generation for at least three generations, however, the exact amount of years is unknown. Before Ava Ayala, her father, Hector Ayala, and his father before him (Nestor Ayala) had full possession of the amulet.

In the episode "Kraven the Hunter," a man named Sergei Kravinoff stole the amulet from Ava Ayala, but was unable to control it and was transformed into a tiger looking man. However, Spider-Man and Ava were able to re-take the amulet.

In its dormant state, it grants the user:

In its awakened state, the user's iris's turn light green, their canines elongated, their hair becomes wild looking and claws appear on their fingernails. It most likely grants the user enhanced abilities even stronger buts makes the user more feral. The amulet also grows in this state.

In it's final, the user has completely lost control of the amulet's power and literally turns in a humanoid white tiger. In this state, the abilities the Amulet grants are at their maximum, but the user is also 100% feral. The amulet changes into that of grown tigers head. Alo speech patterns common to humans are replaced with growls.

Retrieved from "https://thedailybugle.fandom.com/wiki/White_Tiger_Amulet?oldid=37269"
Community content is available under CC-BY-SA unless otherwise noted.