Ultimate Spider-Man Animated Series Wiki
Register
Don't have an account?
Sign In
Advertisement
in: Season one episodes, Episodes directed by Alex Soto, Episodes written by Man of Action,
and 13 more

Venom is the 4th episode of the first season of Ultimate Spider-Man. It aired on April 15, 2012.

The trainees fight off Venom, who shows up at one of Harry's parties.

Spider-Man is being chased by an robot with tentacle arms with his spider-cycle in the underground subway. He evades the blow of the unknown object. Spider-Man got captured by the robot and tries gather a blood sample from him. Spider-Man distracts the thing with his new modified web-shooters to electrify it, along with himself. After it got distracted, the robot got destroyed by an upcoming train. The civilians nearby mock Spider-Man as his butt showcased itself to them after the robot torned the piece off. After embarrassingly scooting away from the laughing crowd, Spider-Man leaves the station to go to school, as he went there the robot lets out a small robot, which holds a blood sample of Spider-Man.

Peter tries to get on time to school, as he arrives at the front door it shuts itself. Harry shows himself and helps Peter to get through the window. Peter then explains that Harry is a good friend to him giving the audience an example. Flash throws Peter out of the boy's locker room and girls outside in the hallway begin laughing at him when Harry comes in to the save the day with "convenient extra outerwear". Harry reminds Peter to come in the night for a movie marathon with MJ, the team approaches and drags Peter to the cafetaria.

Otto Octavius is researching the blood sample of Spider-Man, by taking out the deadliest aspects of Spider-Man's DNA he creates a living organism. Octavius promises to Norman Osborn that he can create an army of soldiers in a few months, Norman rejects it and wants something by tonight.

At the cafetaria Peter is being laughed at by his teammates, Peter gets annoyed that they are always with him and wants some times to be with Harry. Sam makes a snarky remark about Harry, as Harry hears he frustrates about it and leaves them. Peter chases after Harry, but the latter shuts him down. MJ arrives and cheers Peter up.

In Harry's home, Harry complains to his father that Peter has ditched him as Norman is distracted by the Spider-Man news and leaves the home and lets thousand dollars behind for Harry. Peter and his teammates arrives in the appartement of Harry and much to his surprise reveals to be a party. Norman arrives in the facility of Octopus that is destroyed by the symbiote Venom, Octopus deduces that Venom escaped the facility to venture to Spider-Man.

At the party Peter talks with MJ about Harry's change of plans, Harry appears next to them complaining about Peter and his new friends. As the party goers cheer on Harry, Peter Parker spider-sense tingles and goes to the bathroom. He meets Flash there, before Flash gives Peter a swirlie, the Venom symbiote comes out. The symbiote attaches to Flash and tries to get a hold of Peter, while the latter evades it.

Venom fights off against the young superheroes, but is easily taken care of by Venom. While the fight is happening Harry and MJ went to rooftops to get some pictures and rescue Peter. Venom notices Harry and decides to attack him, but before he could do it Spider-Man withstands Venom's power and tries to get out of his body while fighting it. Harry hangs on a ledge but gets rescued by MJ. Spider-Man then activates the electricity enchancement on his web shooters and electrifies Venom. Harry asks where Peter, which Spider-Man replies that he is safe. Norman arrives at the rooftop, he frustrates that they destroyed Venom. Norman hugs Harry that he didn't got hurt and shows gratitute to Spider-Man.

Norman arrives in Octavius's facility and demands a new improved Venom. His employee dryly promises it by making it his "life's work". In Harry's appartement, Harry is cleaining his living room, Peter arrives and the both of them make up with each other. Peter tells about his friends and that they are alright, while Harry finds a piece of the symbiote and puts it in a bottle, showing it is alive.

You wanted a monster, I made you a monster...or a master piece. - Doctor Octopus

Parker, Hey. (grabs Peter, ready to give him a swirlie) Let's see if Osborn's fancy toilet has a swirly button. - Flash Thompson 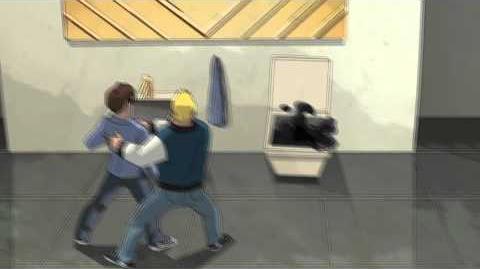