Ultimate Deadpool is the 16th episode of the second season of Ultimate Spider-Man. It aired on July 7th, 2013.

Spider-Man gets to be in Deadpool's madcap world for a day.

While Spider-Man is on his way to training, his usual monologue is interrupted by the sudden appearance of Deadpool who breaks the fourth wall, even so than Spidey.

When Spider-Man and Deadpool meet, the team tells Spider-Man about Deadpool and how he was a S.H.I.E.L.D. trainnee before he dropped out to become a freelance hero shortly before Spidey joined the team. Deadpool soon tells them that a S.H.I.E.L.D. agent named MacGuffin has stolen a file that contains the identities of every superhero and he's willing to capture the rogue agent.

Seeing just how awesome Deadpool, Spider-Man decides to ditch his training and goes with Deadpool to retrieve the S.H.I.E.L.D. file. Along the way, they soon discover that Taskmaster is involved. At first, they slowly begin to like each other as friends but that is soon fades away as Spidey learns that, unlike everyone at S.H.I.E.L.D. and everything he has learned, Deadpool has no rules or moralities and he's willing to kill anyone, especially the bad guys. Spider-Man soon realizes that Deadpool is not a freelance hero, but a mercenary.

Because of the webslinger's growing dislike for Deadpool's antics, attitude, and willing to kill, Spidey intends to lecture Deadpool while fighting Taskmaster and his henchmen without killing them. Once they retrieve the file, Spidey learns that there was no Agent MacGuffin at all, it was all a lie made up by Deadpool. In truth, Deadpool is the one who stole the file in the first place and plans to sell it for the highest bidder. However, Taskmaster stole it before the mercenary had the chance. Thus, Deadpool used Spider-Man to help him to retrieve it. Unwilling to let that happen, Spidey fought Deadpool in the latter's madcap world, which ends with Spider-Man victorious.

Spidey soon learns of Deadpool's true origin: he was an ordinary teenager who gotten picked and bullied by thugs. He was found by Nick Fury, who took pity on the poor kid and took him in. Fury recruited him into his Young Heroes program where he would train alongside Nova, White Tiger, Iron Fist and Power Man. However, Deadpool became disillusioned with Fury's goals. He claims, "It was more fun to laugh at the pain, to hurt those who hurt you times a thousand!"

Spidey understands Deadpool's pain as he realizes that if things hadn't turn out well, he could've become just like Deadpool.

In a surprising twist, Deadpool decides to let Spidey go claiming that the latter had 'won fair and square.' Spidey tries to get Deadpool to return to S.H.I.E.L.D. but the mercenary merely scoffs at it before he escapes with a jetpack. 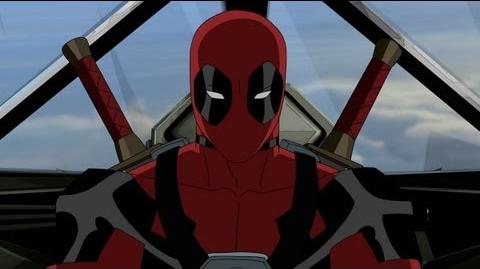 Retrieved from "https://thedailybugle.fandom.com/wiki/Ultimate_Deadpool?oldid=35746"
Community content is available under CC-BY-SA unless otherwise noted.