Spidah-Man! is the seventh episode of Ultimate Spider-Man Season 2.

Boston invites Spider-Man to be their official hero.

When J. Jonah Jameson offers a $10,000.000 for Spider-Man being unmasked as everyone attempts to get him, Aunt May leaving town to visit a relative, and the rest of the team going with Phil Coulson to a water park, Spider-Man is invited by the Mayor of Boston to become Boston’s superhero much to his relief and joy to leave the very city who misunderstood him. When he arrives he is welcomed the mayor and given the key to the city. He is taken to his very own Spider-Cave and showed all the new gadgets and vehicles such as the Spidey-Copter and Spidey-Tank, even a Spidey-Pogo. He even receives a butler calls Charles who brought him some snack. Spider-Man much to his annoyance also was had a sidekick Ollie Osnick, calling himself "Webby", a boy genius who designed all the equipment. Fearing his safety he send the boy home. He then uses the vehicles to take down various criminals. Not long after that, Spider-Man has encounters a group of armored supervillains called the Boston Terroriers consisting of Plymouth Rocker, Salem's Witch and Slam Adams. After a brief fight he is confronted by the Steel Spider, who created the team. The Steel Spider is revealed to be Ollie, who created his team after the rejection of Spider-Man. Spider-Man apologises and Ollie realises he only ever wanted to be a hero and together they take down the Boston Terroriers, using each members built in weakness. Spider-Man then appoints Ollie the new protector of Boston and returns home to New York, who's crime rate has sky rocketed in his absence. 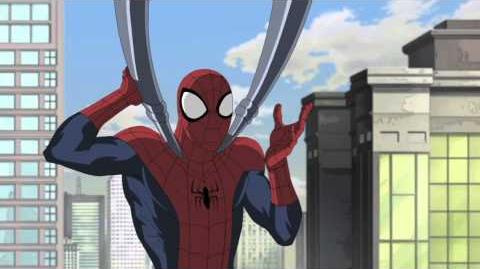 Retrieved from "https://thedailybugle.fandom.com/wiki/Spidah-Man!?oldid=35723"
Community content is available under CC-BY-SA unless otherwise noted.