Snow Day is the 17th episode of the first season of Ultimate Spider-Man. It aired on 5 August, 2012.

The team sneak off for a vacation and the Sandman make sure they never leave.

Peter lays in bed, he wakes up to a phone call from Nova, claiming he is in need of help urgently. Peter quickly suits up and rushes outside. He trips on snow and falls in front of his teammates, who were with Nova when he made the call. Spider-Man's teammates reveal that there was no threat and they had been sent to pick him up for a mission.

The team disregards Fury's orders and goes to a beach looking island. The team quickly get out of their costumes and into beach clothes. Nova carves the sand to resemble himself in his costume, but, Luke accidentally falls on it. The team plays tetherball, Nova insists and even makes it a rule, not to use their powers. White Tiger uses her acrobatic skills to win instead, much to Nova's shock. Peter kicks the ball and it lands outside of the team's reach and further onto the island. His teammates, especially Nova, insists that he get the ball. Peter goes to get it and while getting it, encounters a little boy. The boy tells the team his name is Sandy. While he's talking to them, Peter and Luke notice something is up with him, especially when their feet become trapped in the sand.

Sandy tells the group to follow him. The boys insisted on leaving him and getting off the island, but, White Tiger told them that it was their obligation to help him. As the boys go with White Tiger, they start to get luscious. White Tiger tries to ask Sandy a few questions before he runs off and tells them their playing hide and seek. They encounter Sandy's older brother, Flint. As the team decides things are getting somewhat strange, they go to their jet to get off the island. However before they can do that, they are confronted by Sandy. Sandy gets mad at them because he insists all he wanted was for someone to play with him. He then turns into sand and takes their jet. The five are chased off into a maze, where Spider-Man discovers that S.H.I.E.L.D. had left Sandman on the island. They are hunted by Sandman. 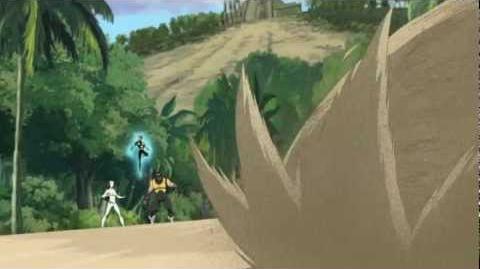