The GOBLIN? Defeated. CONTEST OF CHAMPIONS? Nailed it. Aunt May knows all about Peter Parker's double life and is totally cool with it and Peter's best friend Harry is getting along with his reformed dad, Norman. Yep! It seems like everything is coming up Spidey these days! If only it would stay that way.

The story begins with Doctor Octopus fleeing before he runs into Agent Venom and Iron Spider who asks what his hurry is and why he is fleeing. Spider-Man jumps on him and Doctor Octopus fights the three. He is impressed by the spider-sense and shocks Iron Spider down. Spider-Man defeats Doctor Octopus by shocking him. Agent Venom thinks that it was easy but Spider-Man suspects that something is wrong. On the S.H.I.E.L.D. Tricarrier, Nick Fury is impressed that they've captured Swarm and Doctor Octopus and gives them permission to go to the cafeteria to have ice cream.Iron Spider tells Agent Venom that he wants to sop on the way to the labe to study Spider-Man and Agent Venom's spider-sense so that he can modify it to his armor to work the same way. Meanwhile, Nick Fury tells Spider-Man that he wants to commend him on the great job he has done training Agent Venom and Iron Spider, that S.H.I.E.L.D. has seen remarkable advances in all of the S.H.I.E.L.D. trainees under his leadership and that he has been promoted to "Student Instructor". Meanwhile, S.H.I.E.L.D. agents are escorting Doctor Octopus to his cell and as they are passing Swarm's cell, a miniature octobot breaks into his cell, takes over and destroying him in the process. Spider-Man and Nick Fury hear the explosion and find that the attack isn't coming from outside but from inside. They find Doctor Octopus standing there and reveals that Swarm's nanites are swarming everywhere under his command and thanks Spider-Man for bringing him into the Tricarrier. An explosion appears next to Nick Fury and Spider-Man and they look to see Goblin Soldiers in HYDRA armor. Doctor Octopus leaves so that he can continue with business and while they get acquainted with the Goblin Soldiers. Spider-Man and Nick Fury escape the Goblin Soldiers to find Doctor Octopus is gone and that the Tricarrier is being rebuilt. They are met by Agent Venom and Iron Spider who don't know about the Goblin Army but have also experienced what is going on. Nick Fury explains everything to them before they are attacked by Goblin Soldiers. Iron Spider's spider-sense works and Agent Venom saves him. Nick Fury asks Iron Spider if he can send a message to the Triskelion but Iron Spider tells him that the nanites are moving towards them making Spider-Man wonder what for. Doctor Octopus appears again and reveals that it is to complete their mission. The four find that the nanites have reconfigured his body into a new life-support armor. He reveals that he is no longer weak-bodied but has now become: The New and Improved, Ultimate Doctor Octopus of HYDRA making the four shocked that that he mentioned HYDRA. They are then met by more Goblin Soldiers and the reawakened Arnim Zola. Arnim Zola reveals that Doctor Octopus and HYDRA have joined forces and that with their combined genius, they will destroy S.H.I.E.L.D. making Nick Fury angry and fights Arnim Zola. While fighting, Spider-Man asks Iron Spider if there is a way to stop the nanobots. Iron Spider reveals that he had been working on an Anti-Swarm Transmitter but hasn't been able to get the Anti-Nanobots to adjust to the changes in Swarm. Spider-Man asks if he can make his digital spider-sense to to cause the swarm to react making Iron Spider think it is brilliant but reveals that the lab is gone. Spider-Man tells Iron Spider and Agent Venom to leave and get to the lab of the Triskelion. Doctor Octopus taunts Spider-Man but Spider-Man webs him up and Nick Fury uses Arnim Zola's blaster to blast Doctor Octopus out of the Tricarrier. Arnim Zola finally gets Nick Fury off him breaking his ribs in the process. Spider-Man saves him and both of them leave to get to the outside and find that the Tricarrier has been changed into HYDRA Island. Arnim Zola reappears and reveals that he designed it himself and brags that HYDRA has won. Before Spider-Man can get away, Arnim Zola destroys the ground under him, blasting him and Nick Fury down. Arnim Zola tries to get him to surrender and to admit that there is nobody to help him. Nova appears and blasts him down. Nova asks if Nick Fury is all right and Spider-Man tells him that he is injured from broken ribs but it is not serious. Spider-Man asks him if Agent Venom and Iron Spider made it and Nova tells him that they told him to give Spider-Man the transmitter. Spider-Man thinks that it will work if he puts it onto the signal because it is the highest point. He tells Nova to get Nick Fury away while he handles it alone. Spider-Man plants the transmitter and is about to turn it on but Doctor Octopus reappears again and destroys the transmitter. He grabs Spider-Man and reveals that his old body may have been destroyed by the fall but his new armor just suffered minor damage. He also taunts him about his victory being short lived like he will be. Spider-Man manages to break one of his tentacles and falls while asking if the minor damage damaged the connection on the mechanical arms. He lands in the Hudson River and believes that it is over but just as his eyes are closing, he see a figure swimming to him. He wakes up to find that he is alive but finds that the Triskelion and his friends are gone before hearing a voice saying that it is not him that is gone. He turns to find another spider-themed person standing there. He reveals that he saved his life and that the only way they can defeat HYDRA is fi they work together. He reveals that his name is: Scarlet Spider

Differences Between The TV Episode and Comic 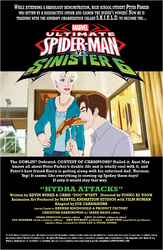 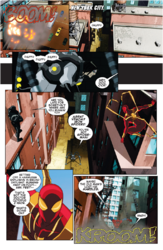 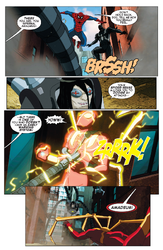 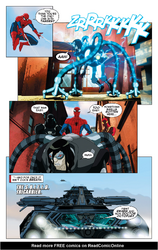 Add a photo to this gallery
Retrieved from "https://thedailybugle.fandom.com/wiki/Marvel_Universe:_Ultimate_Spider-Man_vs_The_Sinister_6_-_Hydra_Attacks:_Part_1?oldid=36589"
Community content is available under CC-BY-SA unless otherwise noted.