Itsy Bitsy Spider-Man is the 12th episode of the second season of Ultimate Spider-Man. It aired on June 9, 2013.

Spider-Man and his team cross Loki and are turned into mini-versions of themselves.

The team investigates the remains of something that crashed into the Hudson river. They find the Asgardian weapon known as the Destroyer. When Spider-Man touches the Norn Stone on it's chest the team are transformed into miniature child like versions of themselves. They were taken to the Helicarrier and test were performed on them. Nick Fury with no other options was forced to put the team in D.A.Y.C.A.R.E. (Daily Advanced Youth Character And Regimented Education), and monitored by Nanny Bots, with Agent Coulson's face. There they meet another little boy with snot coming out of his nose. The boy is revealed to by Loki out for revenge. But they are rescued by Thor who had also been transformed into a child. The team escape D.A.Y.C.A.R.E. only to be attacked by the Destroyer armor, Nick Fury order the team to leave in a Quinjet, which is destroyed an are forced to parachute to a rooftop. Loki then possesses the Destroyer as the battle leads to a nearby Toy store. They are able to retrieve the Norn Stone, and with Loki released from the Armor they transform him to a childlike form and return themselves back to normal. 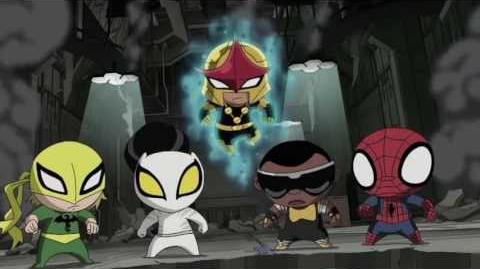 Retrieved from "https://thedailybugle.fandom.com/wiki/Itsy_Bitsy_Spider-Man?oldid=35741"
Community content is available under CC-BY-SA unless otherwise noted.