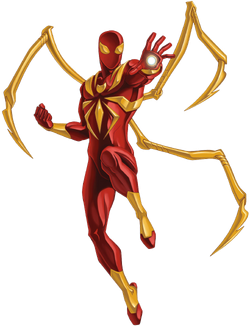 The Iron Spider Armor is a suit of armor that Spider-Man uses in combat. Tony Stark made the armor to give to Spider-Man because his suit was ruined and Tony wanted to guide him.[1]In Season 3, Spider-Man gives the armor to Amadeus Cho.

The Iron Spider Armor has an arachnid-based design and is the same color as Iron Man's armor.

Just like the silhouette on Spider-Man's costume, it's the same design, but it is larger and gold in color. Most of the armor is red, with the golden parts being on his back which holds his three mechanical arms, wrists, ankles and his polaroids and two repulsor blasts on his palms. The suit can also transform into a small backpack.[1]

After Tony Stark met the S.H.I.E.L.D. trainee Spider-Man, he went back to Stark Industries and developed the Iron Spider armor. When Peter took a tour of Stark Industries, Tony gave the armor to him.

After Spider-Man witnessed his irresponsibility, he later modified the suit and apologized to his team for his actions. They then went after Living Laser in the Stark Industries, Spider-Man showcased his new capabilities and freed Iron Man from Living Laser and transported him to another reality.

After that, S.H.I.E.L.D. modified the suit to change into a backpack and made it portable for Peter. He later used it to stop Doctor Octopus' new Iron Man-like armor.[1]In the episode "New Warriors" the armor is ripped in half and destroyed by The Goblin until it's repaired in the episode "S.H.I.E.L.D. Academy".

In the episode Beached, Doctor Octopus has a Sandman clone use the armor after capturing Amadeus Cho.

Background in other media