House Arrest is the 9th episode of the second season of Ultimate Spider-Man. It aired on April 7, 2013.

Spider-Man battles the criminal known as Grizzly an man in a mechanical bear costume. After a short battle Spider-Man throws him off a roof into a new by dumpster surrounded by police. When returns home he learns that Aunt May has gone away and the team is planning a party at the house. Peter informs the team the they are being watched by S.H.I.E.L.D. so Nova and Peter go to the basement to deactivate the system. While doing so the security system activates and turns the house into a death-trap. Nova and Spider-Man battle a robot in the basement, as the party guests led by Flash become frustrated outside. The team battle all the traps and systems destroying the robot on the way now free Flash informs that all the guests have left. Once outside the house collapsed with Aunt May on her way. At that moment four SHIELD helicopters bring a replicate house and drops it in place and after one or two minor touches everything is back to normal just in time for Aunt May's return. 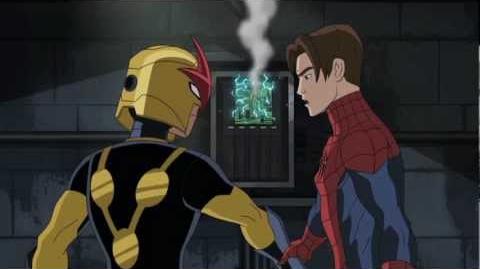 Retrieved from "https://thedailybugle.fandom.com/wiki/House_Arrest?oldid=35738"
Community content is available under CC-BY-SA unless otherwise noted.