Spider-Man works with Captain America and Wolverine to stop a new threat.

Within the confines of the S.H.I.E.L.D. Tri-Carrier, Spider-Man and his friends are training against Life Model Decoys, LMD's. Suddenly, the training turns deadly, as the LMD's unsheath their deadlest blades and blasters against Spidey and his comrades. It turns out, Nick Fury and S.H.I.E.L.D. have uncovered a plot by mutant techno-mage Arcade, to bomb the United States of America with 12 nuclear bombs. Then, Captain America enters the briefing room, and is suddenly assaulted by Director Fury. As it turns out, the Fury in the briefing room is an LMD. The real Nick Fury enters the room, and briefs Captain America of the situation.

On the deck of the Tri-Carrier, Captain America wraps up his conversation with Fury - as Spider-Man is in attendance. Director Fury tells Spider-Man in no uncertain terms, that he is not to accompany Captain America; this mission is too dangerous, and calls for expert super agents to stop Arcade. As Captain America is piloting his assault aircraft, he hears a noise around the cockpit: it's Spider-Man, who played the role of a stowaway.  It short time, the aircraft is assaulted by drones, and Spider-Man and Captain America have to eject themselves, and manipulate the drones to take them into Madripoor.

Once in Madripoor, Spidey and Cap reach their destination. Upon entering a facility, they see Wolverine slicing away at Arcade's LMDs. Wolverine feigns a berserker rage, and launches into a sparring match with Captain America. The two veteran heroes exchange information, and Spidey and Wolverine also exchange quips. Eventually, the trio clash directly with Arcade, who utilizes a virtual battle facility, LMDs, and even a Sentinel, to engage the heroes in a live action video game.

Ultimately, the heroes make their way through LMD doppelgangers, duplicates of The Hulk, Red Hulk, and then a Sentinel; then battle hordes of assault droids employed by Arcade. Arcade is cajoled into disarming the nukes, and is apprehended by Spidey, Cap, and Wolverine. 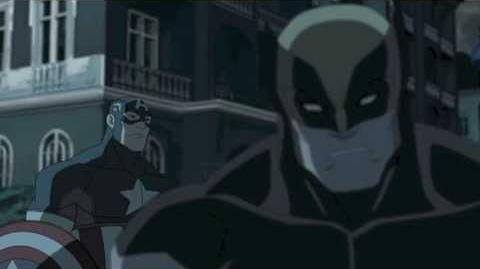 Retrieved from "https://thedailybugle.fandom.com/wiki/Game_Over?oldid=35752"
Community content is available under CC-BY-SA unless otherwise noted.