For Your Eye Only is the 15th episode of the first season of Ultimate Spider-Man. It aired on July 22, 2012.

Spider-Man is alone to defend against the forces of Scorpio and Zodiac.

The alias Spider-Man uses while posing as a Zodiac grunt is StanDitkoberg, a combination of Stan Lee and Steve Ditko, who co-created spider man and most of the marvel universe's foundations.

The label maker regifting gag was a reference to the 1990's Sitcom Seinfeld, specifically the episode " The Label Maker", which was also the first notable use of the word regift.

The title, laser trap fury was in, and timer ending on 007 are all james bond references.

Spider-Man: Gee, thanks Spidey-sense. Like I woundn't figure out I'm in trouble. 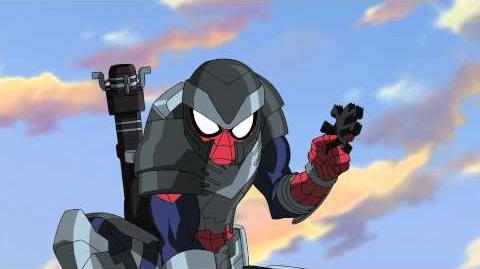 Retrieved from "https://thedailybugle.fandom.com/wiki/For_Your_Eye_Only?oldid=35705"
Community content is available under CC-BY-SA unless otherwise noted.