Field Trip is the 9th episode of the first season of Ultimate Spider-Man. It aired on May 20, 2012.

Thor enlists Spider-Man's help in keeping Loki from taking the throne of Asgard.

The team go one a field trip to the Metropolitan Museum where they view a Nordic Stone. Peter is uninterested in the field trip, as every time he goes on one, he is always bitten by some animal (first a goat, then a dolphin, and finally the spider that gave him his powers).

When Danny reads the rock it causes a Frost Giant to appear, which they are forced to fight. Due to their weaknesses as a team they barely survive the battle, until they are saved by Thor. Using his Hammer he freezes the giant, but he breaks free and the two battle and taken him down with his hammer. Thor finds a Norn Stone around the giants neck which touches and turns him into a Frog.

Now in Frog form Throg realizes Loki is responsible and recounts his origin to the team. Throg and the team travel to Asgard via Bifrost. In the city they find it's people frozen, and are attacked by a horde of Frost Giants. In the throne world Loki has Throg trapped in a energy ball and taunts his brother, while Odin rests in his Odinsleep. The team is frozen by the giants, but Iron Fist is able to find the weakness in the ice and break free before battling the giants. Nova rescues Throg and recovers his hammer, but Loki is too powerful and are forced to escape.

They travel to Nidavellir, the realm of the Dwarves, and meet with Eitri master forger. They request his help to create weapons to defeat Loki. Eitri refuses, saying that Thor never thanked him for Mjolnir. Spider-Man tells Throg to apologize, and he reluctantly does. Eitri then gives the team weapons to fight Loki. The weapons each use their shortfall as a strength: White Tiger has a mystical bow that can only work when she ignores other distractions. Nova has a Halberd that only works with a steady hand. Iron Fist is given a short sword forcing him to trust his instincts and Power Man uses and Axe to harness his power. Spider-Man is given nothing but the duty to lead the team and use his banter.

The weapons work and they defeat the Frost Giants. Spider-Man and Throg confront Loki, and Spider-Man pulls a trick on him to turn Thor back to normal (which Spider-Man can't believe he fell for). Thor then easily defeats Loki, but he teleports away. Back at the museum they are given a gift of a two headed goat. The team allows Spider-Man to have the goat all to himself, but as he reaches out to pet it, one of the heads bites his hand.

This episode's storyline shares some similarities to the live action film Thor (film) from Marvel Studios. 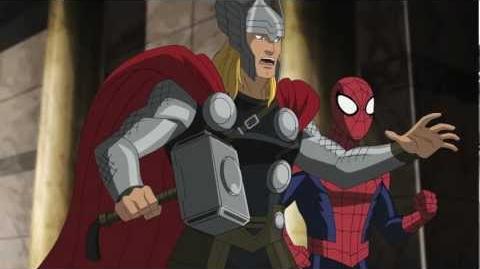 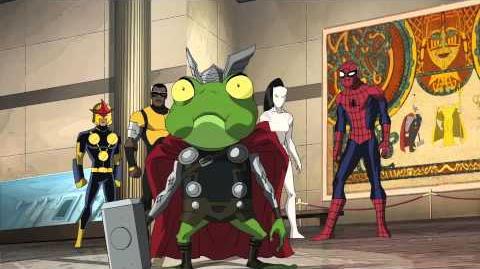 Retrieved from "https://thedailybugle.fandom.com/wiki/Field_Trip?oldid=35698"
Community content is available under CC-BY-SA unless otherwise noted.