When Spider-Man's old enemy Electro takes control of all the electricity in New York City, Spidey and his team work together to stop him before he takes over the world.

Spider-Man battles Electro a costumed villain with electricity based powers. During the fight he smashes Electro into one of the Daily Bugle's television screens and elctro-shocks him with the electric webbing. The process appears to vaporize him. When Peter returned home the team are distracted using various electrical devices, but when the power goes out they view a message from Electro, now energy life-form, who has turned off all the power in the city. They rush to the Spider-Cycle but has no power either. Nova using his power pushes the team on the bike into the city only to crash on the way. It is then up to Power Man to push the bike the rest of the way. Electro the possesses the bike causing the power to some on and ride out of control. When they got off the bike they are confronted by a crowd of people who blame Spider-Man for the blackout. On the bridge Batroc the Leaper is using this as an opportunity to steal from the trapped vehicles on the bridge, but he escapes. They used a cable car to travel across the bridge pushed by Nova, but Electro takes control sending them crashing to the station, but were are able to jump out just before. Electro takes control of a bus, but Nova and Power Man are able to stop it before it crashed. Electro arrived in his new form and zapped the team. The team battle Electro as he steal from ATM's until Nova, asked him why is wasn't stealing from banks. Electro with his new plan attack a nearby bank vault. He then takes over the Daily Bugle Communication satellite and now appears to be everywhere. When Batroc comes out of a jewellery store Spider-Man webs him up. The team start to notice the more Electro devides himself the more confused he becomes. They cause him to split into so many times that he is returned to his human form allowing Spider-Man the opportunity to knock him out. The team the learned from the adventure and decide to have a electricity free evening. 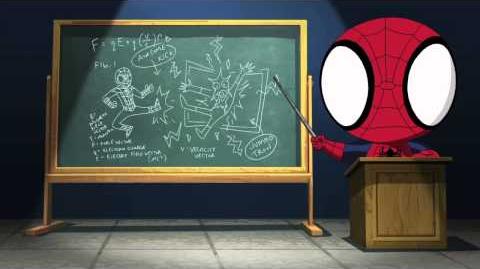 Ultimate Spider-Man - Electro
Add a photo to this gallery

Retrieved from "https://thedailybugle.fandom.com/wiki/Electro_(episode)?oldid=35718"
Community content is available under CC-BY-SA unless otherwise noted.